GIVING CONTOURS TO SHADOWS
an exhibition and research project 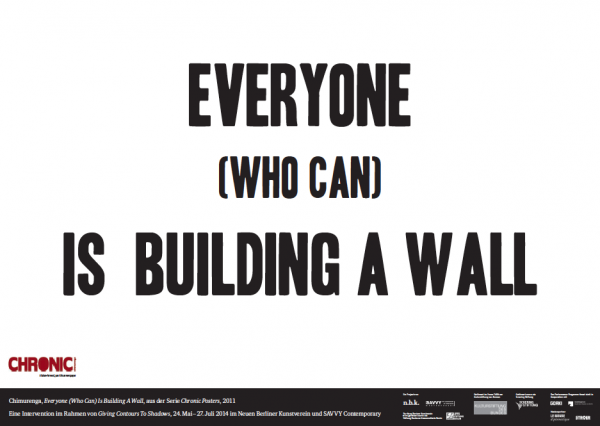 Chimurenga Everyone (Who Can) Is Building A Wall, from the series Chronic Posters, 2011

CHIMURENGA
The launch of the Chimurenga Chronic on Black Wednesday *, 19th October 2011 was preceded by a 6-week public art intervention in the form of a poster campaign in Johannesburg, Cape Town, Abuja, Nairobi and Gothenburg. Featuring questions as provocations, the campaign explored the city as newspaper and tapped into how word-of-mouth and radio-trottoir generate the new and the news. It extended the conversations in the newspaper beyond the page and into public space. The initiative continues with the release of every edition of the Chronic.
*On October 19, 1977, South Africa’s government banned a number of progressive newspapers. Authorities also detained scores of activists and outlawed 17 anti-apartheid groups during this one-day crackdown, which came to be known as Black Wednesday. It is now South Africa’s National Day of Press Freedom, a day to take the news to the streets.
Chimurenga is a project-based mutable object, a print magazine, a work- space, and platform for editorial and curatorial activities. Chimurenga initiatives include the Chimurenga Chronic, a Pan-African quarterly gazette; the Pan-African Space Station (PASS), an internet-based music platform; African Cities Reader, a bi-annual publication of new writing and art on African cities; Chimurenganyana, a series of pavement-disseminated monographs; and many more.

HANK WILLIS THOMAS
Der Tag, an dem ich entdeckte, dass ich farbig bin is the German translation of an artwork entitled, The day I discovered I was colored (2009). It is appropriated from an illustration that was published in Negro Digest during the 1960s. The image underscores the concept of blackness as a learned social condition that is realized in opposition to whiteness.
By employing the ubiquitous language of advertising, Thomas is able to talk explicitly about race, class and history in a medium that almost everyone can decode. He is particularly interested in the commodification of the African-American male body and the fraught connection between this figure and the cotton and slave trade that brought the United States so much wealth.
Born in 1976 in Plainfield, USA, lives and works in New York. His work is featured in the collections of the Museum of Modern Art, New York; the Guggenheim Museum, New York; Oakland Museum of California. He has exhibited at the 12th Istanbul Biennial (2011); CCA Wattis Institute, San Franciso (2011); Baltimore Museum of Art (solo, 2009); MoMA PS1, New York (2010, 2009); High Museum of Art, Atlanta (2008), Smithsonian Institution, National Museum of American History, Chicago (1994), a.o.